SO IT BEGINS! Softonic’s official Fortnite Gym! You may be asking what this series will cover, so: 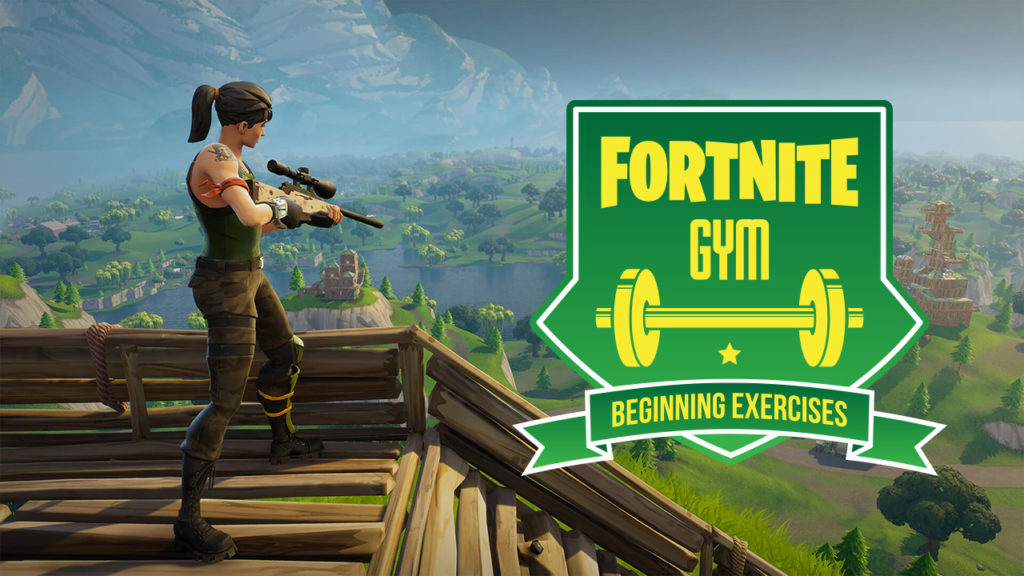 These three training guides – beginner, intermediate, and advanced – will detail timeless exercises to help you overcome any challenge on the battlefield. We mean that seriously: any challenge!

But how can that be, you might ask? Well, no matter what guns or vehicles Epic Games creates, there are Fortnite fundamentals which can be applied masterfully, no matter the situation. Even on changing terrain, a practiced player can win consistently, and exercising these skills will help you grow faster than you would by just playing more often.

Of course, that means you should think about how to use this training. Each game you play, try focusing on one thing at a time: build better. Shoot more accurately. Learn the terrain. Once you’ve seen sufficient progress in that single area, move on to another skill or the next training section!

Let’s get started. The first mandate is:

Ask anyone: the Fortnite learning experience begins when you start fighting enemy players!

This means landing in places where you can be sure to have enemies: places in the middle of the map that are almost sure to be contested, although new favorites like Paradise Palms work just as well.

We’re going to be honest: you’ll die a lot. However, you’ll also learn a lot, and your general skills will improve quickly. You’ll start learning how to aim, how to run, how to shoot, how to pick up weapons, open chests, and interact with the environment. Just make sure you survive long enough to get a gun! And on that note, we should mention…

There are two ways to do this properly:

To land quicker than anyone else, learn to find the perfect angle between battle bus and target location so you can jump, dive, and glide right onto a building in your area. This means opening your parachute and drifting from outside the location. You don’t want to start gliding directly over where you plan to land. 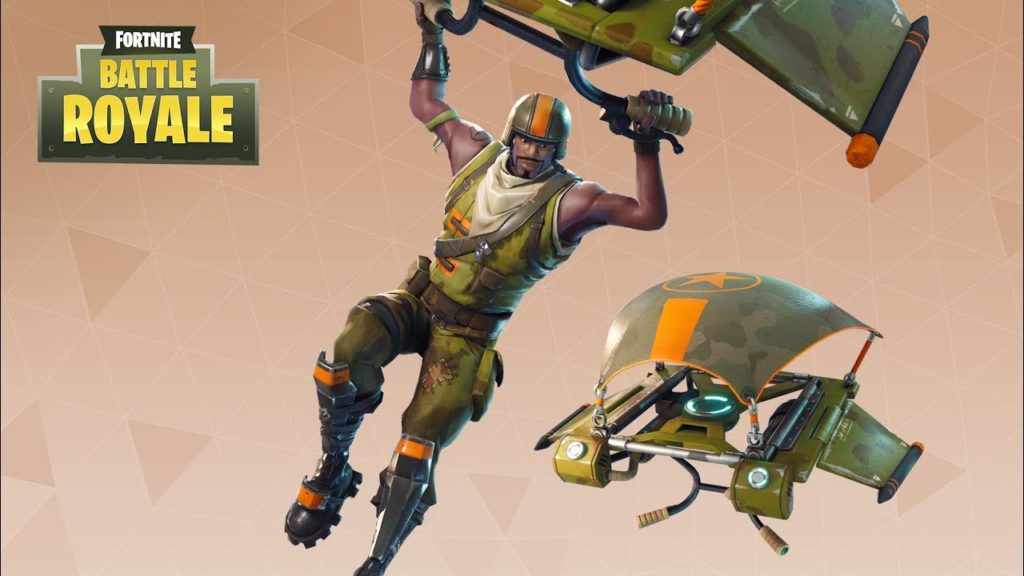 This plan is recommended for newbies. Being the first to touch down and land on a gun gives you a solid foundation in the area. After this, take a moment to get an idea of the surrounding terrain, and be prepared to fight right off the bat. Don’t get taken advantage of by any armed opponents nearby!

There’s also some merit to dropping after the other players: if you’re good at spotting, you can find unoccupied buildings and take note of where enemies are landing. In this situation, you may be able to loot an entire structure, then get right into a fight with a decent inventory.

Be careful, though: sometimes there are simply no openings! For example, if a battle pass challenge directs players to one specific area, it may be over-contested. In this situation, adopt the first technique and drop as quickly as possible to ensure you get a weapon from the start. Or, in dire circumstances, land just outside your target and find something, anything, before heading into the fray.

Whatever you do, remember: the point is to land on a weapon. You never want to be caught empty-handed at the start of the game, so make sure to keep a lookout for other players and available weapons when you see this view: 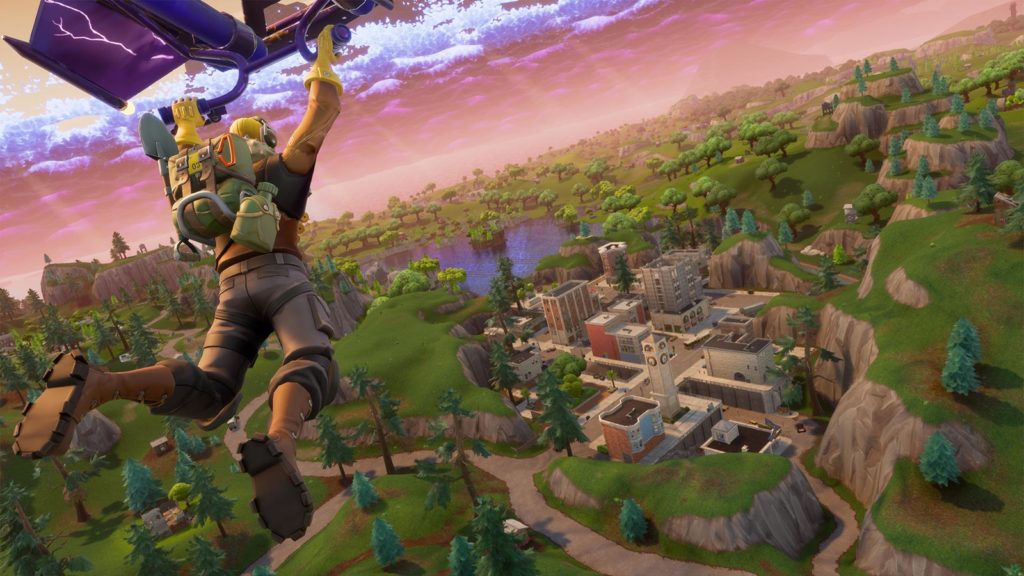 Honestly? If we’re your enemy on the battlefield, we want you to do the exact opposite. Please run out in the open and stand unguarded while we freely line up shots from safety. It’s the best when enemies do that!

Or, for your sake, don’t. Whenever you’re being shot at, make sure to have some kind of cover.

Why do you think the main Fortnite loading screen features a guy carefully hiding at a wall? Because he has a better chance of winning! As long as the glider doesn’t maneuver behind his shield, of course… 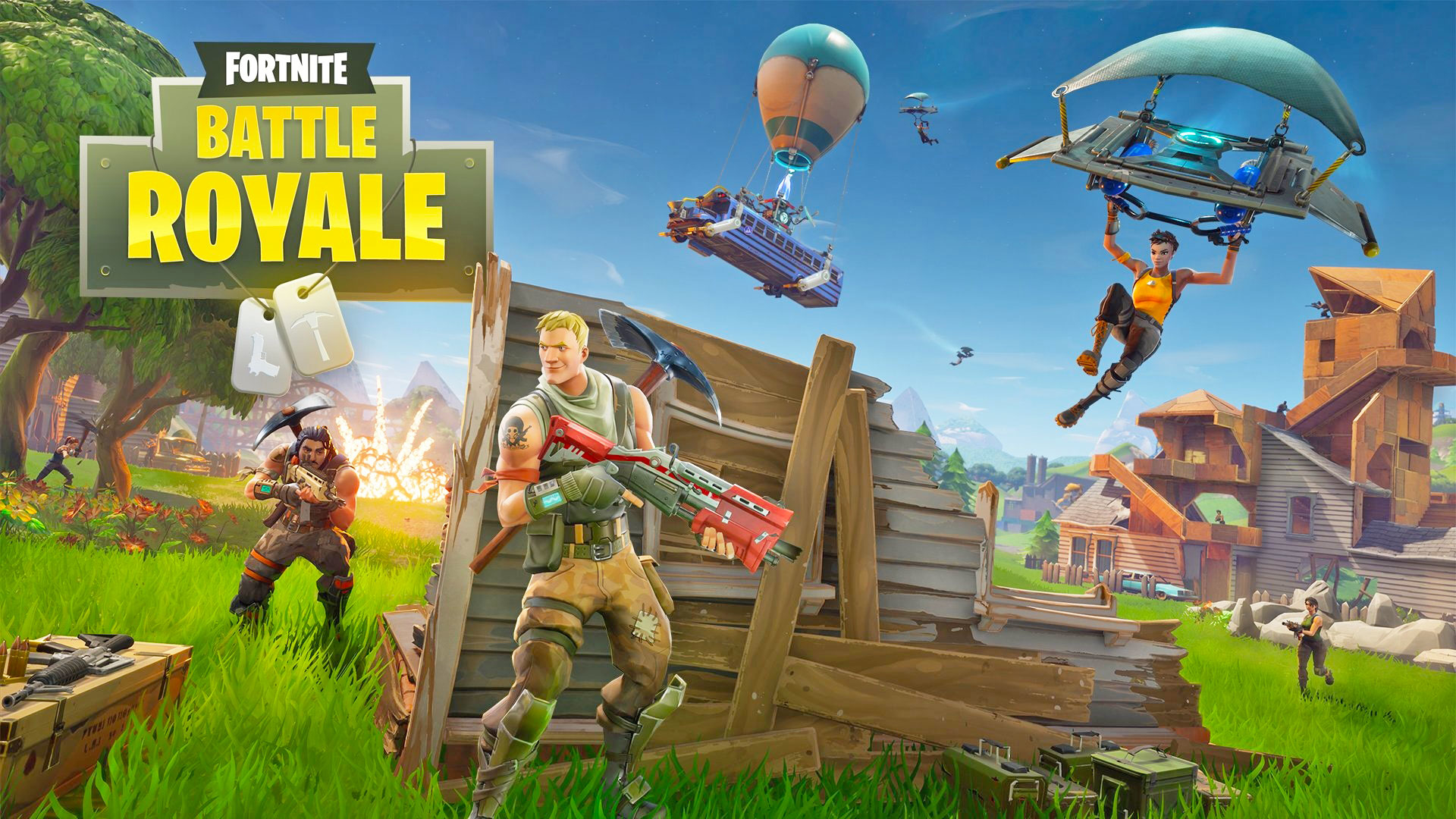 Aside from that, remember when we say cover, we don’t just mean walls created with building materials… we mean EVERYTHING.

Bushes are cover. Fences are cover. Mountains are cover! Wherever you are, make sure your enemy has the smallest target possible. The less they see of you and the more you can see of them, the better. However, we admit there are people who excel at hitting covered enemies regardless. In that case:

Another immutable law of Fortnite:

So move! Move side to the side, jump around, make sure you’re not an easy target. And as before: use cover!

Play Solos (NOT Solo Squads… yet)

Solos, solos, solos! Playing alone makes you awesome for a number of reasons:

That was the obvious one, wasn’t it? When playing solos, you aren’t distracted by other teammates and can focus on your own gameplay and movement.

But in solos, you’re surrounded by a huge map on all sides, with nobody to help you spot both loot and danger! You have to find supply drops and hidden llamas. You’re the one scanning the map for far-off enemies, or listening carefully in your headphones for footsteps in a building.

The more you play solos, the more these skills will improve and stick around. You’ll be fully aware of your surroundings, and rarely get caught off-guard by enemies, whether in the open or within close-quarters.

If you die… you die! Solos teaches you there isn’t anyone to help, there aren’t any second chances. You want this mindset even in squads, because making sure you “knock” enemies without getting knocked helps the team. Assuming they’ll help you up and continue the battle hurts everyone.

Now, some may argue that a lone wolf hurts the team. The answer is: yes, that’s true if you fully play like there’s no such thing as team. Don’t do that. We’re talking the survival mindset that solos provides. If you can mix that idea with team maneuvers your squad will grow many times stronger!

Learn how to build

Combat requires building. Throw up walls to defend yourself, build ramps to get over enemies, cage them in and build traps, fire through hatches, gain the height advantage with towers… this list goes on! The point is, start to consider how building is used to fight, move, block, conceal, or distract. You don’t need to be a pro yet, just become a student of the techniques.

Also, recognize when building won’t work. If you’re face to face with an enemy, consider either fighting then or backing away before building. You don’t want to end up aimlessly putting a wall behind them while they fire at you point blank with a shotgun. Yep, it happens.

This is the best build setting to use in Fortnite 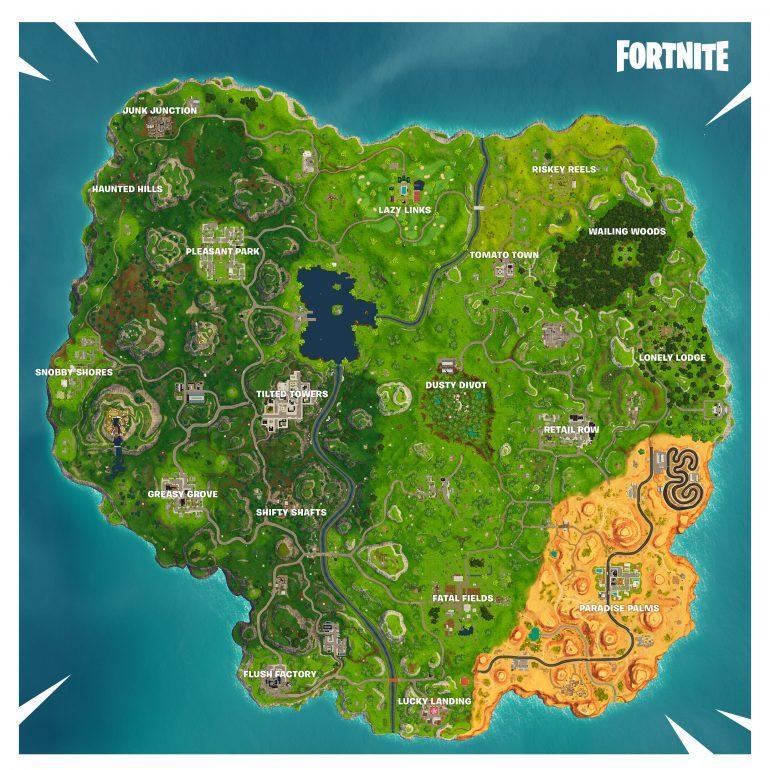 A seasoned Fortnite player will know the specifications of any place on the map, named or otherwise.

Going to Paradise Palms? There’s an easy but exposed chest on the main tower. If you’re contested, there may be other guns on the tower; grab those first and kill the person opening the chest. Sneaky! If the top won’t work, aim for the often-missed chest on the lowest southern balcony, or land at another level, pick up a weapon, and carefully listen for enemies. Be quiet, build barriers behind yourself for protection, and remember that the hotel is open at the front: it’s a sniping hazard!

That’s a lot of information about one place of many you could land at within Paradise Palms. It’ll come in time, no worries!

Of course, you can also keep an eye out for locations while: dropping from the battle bus, as you run through the map, or even while playing around in the waiting area. Know your surroundings, and learn the map!

Land here and gear up! ►

One steady hit or 10 rapid-fire misses. Which matters more?

It’s not even a question!

Oftentimes, “Fight Fever” causes players to fight too quickly and get killed by more level-headed enemies. It’s that inclination to run into conflicts, trying to make up for the other times we’ve lost.

When you have Fight Fever, walk away from the game and take a breath. Coming back, just try to hit an enemy with your weapon once. That’s all it takes to regain confidence!

If you think inventory management is a high-level skill… you’re right! Still, there’s no better time to start than the present!

1. Start thinking about what items you want

Aside from the main two, shotgun and mid-range, it’s always fun to switch things up and try new things: smoke bombs, gatling guns, impulse grenades, etc. The point is, know what you like to fight with and then:

2. Start thinking about where you want those things

A lot of people keep healing items on the right and a shotgun somewhere in the middle for easy access. Find what works for you, and perfect that plan so you don’t get frazzled in combat!

You may be surprised, but even professional players get caught up in the moment and forget to ward off one of the most basic Fortnite hazards: the storm!

“Perfectly balanced, as all things should be” – Thanos

Once you’ve mastered these steps, it’s time to take the next step in your Fortnite skills. Head back to the gym here: